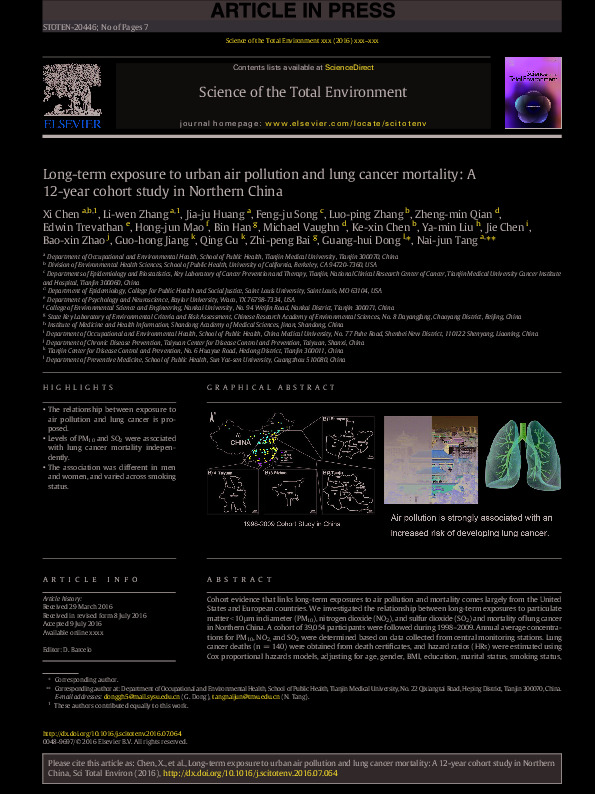 Cohort evidence that links long-term exposures to air pollution and mortality comes largely from the United States and European countries. The authors investigated the relationship between long-term exposures to particulate matter < 10 μm in diameter (PM10), nitrogen dioxide (NO2), and sulfur dioxide (SO2) and mortality of lung cancer in Northern China. A cohort of 39,054 participants were followed from 1998 to 2009. Annual average concentrations for PM10, NO2, and SO2 were determined based on data collected from central monitoring stations. Lung cancer deaths (n = 140) were obtained from death certificates, and hazard ratios (HRs) were estimated using Cox proportional hazards models, adjusting for age, gender, BMI, education, marital status, smoking status, passive smoking, occupation, alcohol consumption, etc. Each 10 mg/m3 increase in PM10 concentrations was associated with a 3.4%–6.0% increase in lung cancer mortality in the time-varying exposure model and a 4.0%–13.6% increase in the baseline exposure model. In multipollutant models, the magnitude of associations was attenuated, most strongly for PM10. The association was different in men and women, also varying across age categories and different smoking status. Substantial differences exist in the risk estimates for participants based on assignment method for air pollution exposure.

More by These Authors